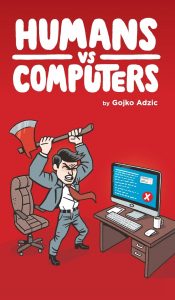 Gojko has done a great job of collecting stories to help us remember how important it is to test beyond the happy path. We often rely on computer’s doing the “right thing”, but it is easy to miss the edge conditions or forget to think about consequences of what we code.

I’ve been heard to say … once or twice … that one of the most important things testers can do is ask questions… those pesky ‘what if’ questions. Many of the stories Gojko has shared could have been prevented by asking basic questions and looking at different scenarios.

At the back of the book, there is a nice summary of different test ideas based on the examples – some that I hadn’t considered and have since used to help my own testing. Gojko has also created a mind map summarizing these learnings.

These are some of the high-level ideas.

Personal Names – so many different variations to think about. I think my favourite is to remember that people’s real name might be a fictional character such as Superman, but one I hadn’t considered in my last testing effort was that people may have a single name so remember to figure out how to deal with that, and how it might feed into other systems.

Time – This is a tester’s bane…  considering leap years, time zones, daylight savings, elapsed time vs clock time and so many other issues. Gojko has given us some great insights and what to watch out for.

Numbers – how hard can they be? But rounding, how you represent decimals, currencies or even missing data or zero can cause huge errors.

Process automation – Many of the examples Gojko used, were about test data being left in with production data and creating havoc. This chapter is worth reading if you’ve not cleaned up your test data, or you have rules in your production to deal with specific tests based on test name or other realistic data.

Addresses – Most of these stories are about not understanding postal codes. Some countries don’t have them or use them, so making them mandatory or basing an algorithm on them existing may cause you issues. Or another example which I am familiar with and has caused me issues is the format. In Canada, we have mixed letters and numbers so when I go down to the U.S. and try to use my credit card at the gas pumps, it gets rejected because many verify with a postal code. I spent too much time venting my frustration at the gas attendants until someone shared a trick – use my 3 numbers and add two zeros.

Overall, the book is entertaining and I had some good chuckles, but the real gold of the book, is the ideas for testing.